A rose among the thorns

By Harriet Persse, University of Queensland, School of Journalism & Communication. 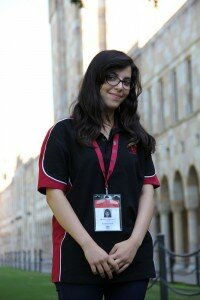 Meriem Chaabani from Tunisia is one of the seven female contestants competing in this year’s competition.

This year’s IOI has 315 registered participants, only seven of whom are girls.

Meriem Chaabani from Team Tunisia is not intimidated to be competing against such a large number of boys.

“I like being one of the few girls in the competition,” she said .

“Although I am nervous, it will mean more to win a medal”.

Not only is it the Tunisian team’s first year in the competition but it is the first time overseas for Meriem.

“My favourite thing is the beautiful nature here in Brisbane,” said Meriem.

After studying informatics for three years during school she is excited to finally put her knowledge into practice.

Meriem was selected after competing in a national competition in Tunisia against 80 people.

She hopes to study engineering or computer science next year at university.

This story was published at IOI Reporter, the official news channel for IOI 2013.

This entry was posted on July 8, 2013 at 9:22 pm. You can follow any responses to this entry through the RSS 2.0 feed. Both comments and pings are currently closed.