By Sophie Lester, University of Queensland, School of Journalism & Communication. 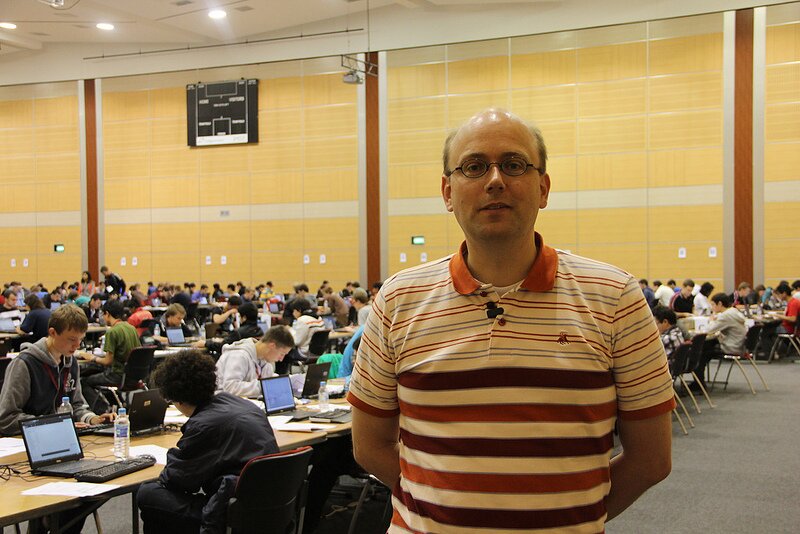 Informatics competitions may not be as enthralling to watch as sporting events, so how do you draw a crowd when the main event is intensive performance from behind a computer screen?

Eljakim Schrijvers of the Netherlands sure knows how to talk mathematics and keep audiences entertained.

Eljakim, or Kim as he prefers to be called, is the team leader of the Netherlands delegate for the IOI and provides a live stream commentary for the exam sessions.

Kim has a long personal history with the Olympiad, having attended 19 competitions previously.

“I participated in high school once, but that was before it was really a big thing,” Kim says.

“Then once I was in university I started helping out with the coaching and after that I just decided to stick around.”

“It is very hard to find people for the leadership position, because you have to take vacation for one week (every year) and that’s very hard for people if they are working because they have to give that up just to volunteer,” he says.

Away from the IOI, Kim manages a software company back in the Netherlands.

“I still spend a lot of time writing software myself because I enjoy doing it,” Kim says.

“I run [the company] so I do all the administrative stuff as well. We have about 20 people and we build computer systems for schools, governments and industry.”

Providing live coverage of the Olympiad exams is challenging when information surrounding the exam progress is not flowing.

“It’s hard to do a live stream when you don’t have information flowing in all the time,” he says.

“There were also technical difficulties, so we didn’t have a live score board, and it’s hard to get enthusiastic when you don’t know what’s going on and you’re not getting those score updates. I think that was the biggest difficulty.”

Kim’s extensive experience with the IOI, both as a team leader and commentator, gives him a unique perspective to weigh in on the future of the competition.

“I would like the IOI to grow a little bigger, but I think it’s getting harder and harder to find host countries,” he says.

Stay tuned and watch Kim cover the International Olympiad for 2014 in Taiwan.

This article was published on IOI Reporter, the official news channel of the 2013 IOI.

This entry was posted on July 10, 2013 at 4:20 pm. You can follow any responses to this entry through the RSS 2.0 feed. Both comments and pings are currently closed.