The University of Queensland is one of six universities to be awarded funding in the priority project round of the Federal Government’s first-ever Australian Maths and Science Partnerships Program (AMSPP).

UQ was awarded $500,000 for the upcoming International Olympiad in Informatics (IOI), to be hosted for the first time in Australia at the University’s St Lucia campus in Brisbane.

Australia is gearing up to be the focus of the international informatics community when we host the International Olympiad in Informatics (IOI) 2013 in July this year at The University of Queensland (UQ).

Informatics is the science of computer programming and encompasses human-computer interaction, information processing and information systems.

In February (21–25), the prestigious IOI International Committee will travel to Brisbane, Australia to discuss plans for the event which will take place on UQ’s St Lucia campus from 6–13 July 2013. Click here to read more. 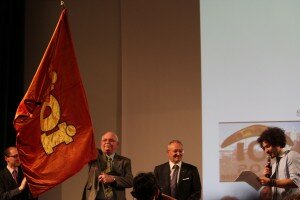 As the curtain closes on the International Olympiad in Informatics (IOI) 2012 in Lake Garda, Italy, and the world’s best and brightest young computer talents return home with their medals, all eyes are now on Australia – host of next year’s Olympiad.

Jointly organised by The University of Queensland (UQ) and the Australian Mathematics Trust (AMT), the 2013 event will be hosted for the first time in Australia on UQ’s St Lucia campus in Brisbane, with participants travelling from more than 80 countries to compete in the event. Click here to read more.